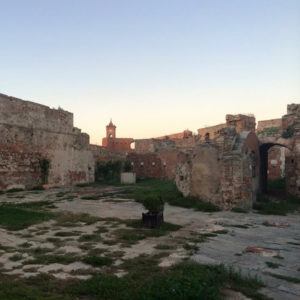 The Fortezza Vecchia was the symbol of Livorno during the Medicean period. It was designed by the Florentine Antonio da Sangallo in 1521 and ended in 1534 under the reign of the Duke Alessandro de Medici. Coming from the sea the fortress surprises the visitor with its red Tuscan color, its massive and solid appearance, the roundness of the bastions and its oblique walls that give to the fortress a kind of elegance. The fortress’ historical value is enriched by the ancient building standing inside: for example the squared tower mentioned in the donation act of Livorno’s village, dated 1103, with which Matilde di Canossa sponsored the building of the Duomo in Pisa.  The rounded tower built in 1241 has the shape of two concentric cylinders between those we can see an helicoidal masonry staircase.Inside the fortress there is also the famous “Quadratura dei Pisani” a squared castle built by Puccio di Landuccio and Francesco di Giovanni, with a walkway area above.The first project of Cosimo de Medici for the construction of the Livorno’s harbor included a building inside the fortress’ walls with the aim of monitoring the progress of this huge work. This building is on the east side of “Quadratura dei Pisani” and it is linked to the San Francesco Chapel by an open gallery. The palace of Francesco, Cosimo’s successor, was built on the Canaviglia Bastion which is the nearest bastion to the sea.Prior to building a paved bridge to the castle from the mainland the fort was surrounded by the sea and was accessible via a pontoon bridge by which horses and carriages could enter. In the 19th century the fortress became a prison which during the Risorgimento also kept political prisoners including Francesco Domenico Guerrazzi, Enrico Bartelloni e Don Maggini. The old fortress sustained extensive damage in World War II but was subsequently repaired following the conflict. The fortress is the birthplace of the Livorno Music Festival, hosting Masterclasses and concerts from the beginning