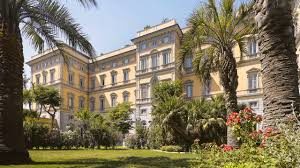 At the beginning of 19th Century Livorno became one of the most popular destinations in terms of seaside tourism.

Italian and foreigner middle classes started to spend their holidays in Livorno, and this was the reason of the creation of many accommodation facilities. The most famous are: Casini d’Ardenza, Caprilli Palace and Hotel Palazzo, also known like Palace Hotel. Bernardo Fabbricotti was the major supporter of the Palace construction. The hotel, whose building was based on a Enrico Azzati project, was opened in June 1884 and the management was entrusted to Sir J.Spatz, therefore the hotel took temporary his name. Is common belief that as guest, the hotel had King Umberto the 1st and The Queen Margherita. The Gran Hotel Palazzo has hosted , since the first edition, the Livorno Music Festival concert.