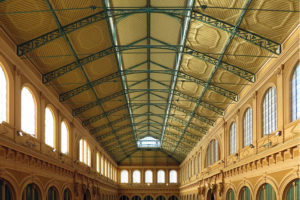 The Vettovaglie Market, also known as the Mercato Centrale, is located on the seaport Aurelio Saffi and at the side of the Real moat. This market is one of the most interesting buildings from the second half of the XIX Century, here is clear the ascendancy of the iron and glass architectures of this time. In order to better understand the importance of this market it is important to explain how Livorno developed after getting the title of Porto Franco, in march 1675, when it became leader in the Mediterranean’s trade. The canals became the heart of the city, and is from here that the city begun to grow, with houses and warehouses overlooking the harbor. The central market is a perfect example of the city developing method, it is in fact linked by canals and it also has its own entrance from the harbor. At present it is one of the most visited places in Livorno. It was built in 1894, under a parisienne model, and it is the second largest Market in Europe.