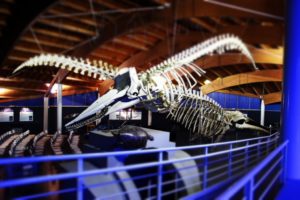 Livorno’s Natural History Provincial Museum was established in 1929 when famous naturalists form Livorno gathered lots of scientific equipment from the “Gabinetto di Storia Naturale” of the “ Istituto Tecnico Amerigo Vespucci” from 1871 to 1909. Unfortunately the natural heritage was destroyed during 1944 bombing. After the war, the museum was moved to the municipal aquarium and reopened in 1952. In 1980, finally, the museum was moved to the current location in “Villa Henderson” whose main building, completely renewed, hosts the operational heart of the Institute. The project of recovery and restoration of Villa Henderson can be divided in two phases: the first deals with the study of the history and the structure conditions, the second one is focused on finding a method to connect both the architectural and the economical purposes of the building. The position of the museum in Villa Henderson, among Villa Fabbricotti, Villa Lloyd, Villa Mimbelli and The Mascagni terrace (where the aquarium is), creates a corridor East-West which is transverse and alternative to the existing north-south corridors in town. This corridor full of interesting attractions gives the possibility to decongest the urban traffic, requalifying new areas in the city. This position changes completely the idea of a closed Museum and gives the idea of a part of the urban and social surrounding. The main area of the eighteenth-century Villa Henderson hosts the technical and administrational quarter with the direction, the graphical room, lab for students, the library and a reading room.