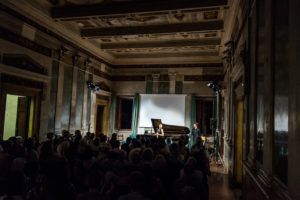 The Villa del Presidente is a building of late 15th century and it is located in an area that a long time ago was outside the city center, in the countryside of Livorno just at the side of the Cappuccini Wood. This Villa is a typical example of how the “ville livornesi” were built at the time : born or transformed not to relax in the countryside, but to enjoy the soul and the body. It has an entrance Portico with Serena stone’s colomns, above it there is a terrace or an arbor that creates an artistic motif rich of volumetrics and of “chiaroscuro”. To access to the Villa there is an entrance at the western part, at the opposite side of the present façade in Marradi street. At the beginning of XVIII century the villa and its plots, for a global extent of 3 hectare, belong to the portogues Garzia Rodriguez, a merchant borned in Lisboa in 1646 who reached Livorno attracted by the positive commercial condition of the maritime trade.    After his death, the Villa was given to his son, Ferdinando Maria. Ferdinando was not good as his father in commerce therefore he needed to sell the Villa to Francesco Harrim, a rich English business owner in 1743. After years and different owners, from 1838 to 1840 the plots of the building were expropriated in order to build new streets. The Villa had as owner Achille e Aristide Nardini, Despotti Mospignotti and others important personality of that time. The Nardini brothers on the 7th February 1889 sold the “Villa del Presidente” to “province of Livorno” for 97000 “lire”. From the beginning of 1900 to 1944 the Villa was residence of the Italian Guard “carabinieri”, then it was headquarter of the “Provincia office” till 1957, when it became the Musical school “Pietro Mascagni”.